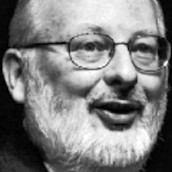 Frederic Woodbridge Wilson was born in Point Pleasant, New Jersey and educated at Lehigh University (where he entered as a physics major but graduated as the school’s first music major) and at New York University. He served as a curator at New York’s Morgan University from 1980 to 1989, an experience that would prepare him for his fourteen-year term as Curator of the Harvard Theatre Collection. From 1996 until his death in 2010, Wilson organized and mounted more than forty exhibitions on subjects including Gilbert and Sullivan operas, Diaghilev’s Ballets Russes, the choreographer George Balanchine, and American popular song. In 2004, he organized the centenary exhibition on Angus McBean, drawn entirely from the extensive photographic archive at the Harvard Theatre Collection. Trained in music history and performance, Wilson conducted more than 500 concerts of choral and early music and published musical editions and arrangements. He was also the author of the DataKit utility programs for humanities scholars.