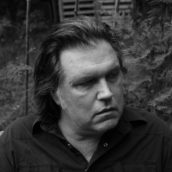 Since the release of Richard Buckner‘s album Devotion + Doubt in 1997, Buckner has attracted and grown a loyal cult following for his unique avant-garde Americana. His work has long revealed a literary side: his 2000 album The Hill features poems from Edgar Lee Masters’ iconic American classic Spoon River Anthology set to music. Cuttings from the Tangle is his first book.